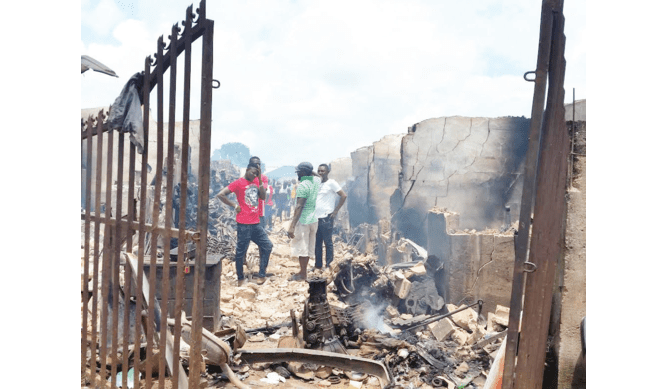 Hundreds of traders at the popular Uwelu Auto Spare Parts in Benin, Edo State, are now counting their losses as millions of naira worth of goods went up in flames in a midnight fire. The fire razed over 90 shops at the market located in Egor Local Government Area of the state. Some of the affected traders said they had just stocked their wares bought from Lagos. Sections of the market affected house shops selling Mercedes Benz, Mazda, Ford and Toyota parts. The fire started about 11.45p.m. on Monday and lasted till 4a.m., yesterday.

Efforts by men of the state fire service from the University of Benin and the Nigerian Army failed as they arrived late.

Sympathisers were seen at the scene of the inferno consoling the victims.

One of the victims, Daniel Okungbowa, who said he lost about N4 million worth of goods to the fire, said he was de aling in all types fuel and oil pump. Okungbowa said he was still confused on the next steps to take. Another victim, Festus Maxwell Osaeruoname, wondered how the fire spread rapidly when there was no power supply to the market.

He said: “We are yet to ascertain what actually led to the fire. We could not remove anything from our shops. Many boys who just got freedom from their masters and open their shops are yet to repay the loans they took from banks.” The Chairman of Spare Parts Dealers Association, Mr. Ibie Osaretin Augustine, said the fire had compounded their woes occasioned by low patronage owing to bad roads leading to the market.